The following is from the INTRODUCTION to D&D Gamma World RPG.

In the fall of 2012, scientists at the Large Hadron Collider in Geneva, Switzerland, embarked on a 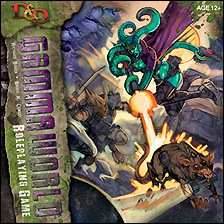 new series of high-energy experiments. No one knows exactly what they were attempting to do, but a little after 3 P.M. on a Thursday afternoon came the Big Mistake. Something unexpected happened,
and in the blink of an eye, many possible universes all condensed into a single reality.  In some of these universes, little had changed; it didn't make a big difference which team won the 2011 World Series, for example. In other universes, there were more important divergences:
The Gray Emissary, who was carrying gifts of advanced technology, wasn't shot down at Roswell in 1947, the Black Death didn't devastate the known world in the 14th century, the dinosaurs didn't die out, Nikolai Tesla did conquer the world with a robot army, and so on. The Cold War went nuclear in eighty three percent of the possible universes, and in 3 percent of the possible universes, the French unloaded their entire nuclear arsenal on the town of Peshtigo, Wisconsin, because it had to be done. When reality stabilized again, an instant after the Big Mistake, the familiar Earth of the 21st century was replaced by one formed from many different realities.
The year is now 2162 (or 151, or 32,173, or Six Monkey Slap-Slap, depending on your point of view).
It's been a hundred and fifty years since the Big Mistake, and the Earth is a very different place. The
ruins of the Ancients litter a landscape of radioactive deserts, mutated jungles, and vast, unexplored wildernesses. Strange new creatures, such as beetles the size of cars and super­ evolved badgers with Napoleonic complexes, roam the world. The survivors of humanity gather in primitive tribes or huddle in trade towns that rarely rise above the technology of the Dark Ages. Even the nature of humanity is now different, because generations of exposure to radiation, mutagens, and the debris of other realities have transformed humans into a race of mutants who have major physical alterations and potent mental abilities.

Now I must take you back to a time not long after the Big Mistake! A scientist or mad-man to some, was desperately trying to save his reality while battling with his own merging consciousness. Using experimental technology and a bit of what some would deem sorcery (due to one of his trans-dimensional selves) he
would create what would be called the BETA-CHAMBER. With this one device he would claim he could separate all the conjoined realities and set things straight. However his brain, now overloaded with tachyonic vibrations from alternate timelines, as well as the musical liltings of the outer Gods caused him instead to attempt to gain ultimate power as only a multiple personality psycho science wizard could!

Knowing the end was near for his physical form as the years of radioactive fallout and ionic atmospheric storms weaked havoc on his nervous system, he began construction upon the fabled Dura-crystal Brain Pan! It was in this device he would transfer his brain and central nervous system to be forever protected and sustained by the very chaotic dimensional energies that were the cause of his insanity.

At the same time throughout multiple realities, groups of adventurers, heroes, mercenaries etc. were gathering to lay siege to the fortress of the mad Techo-Wizard, who now called himself Istrobian the Polytechnic!!

In some realities the fortress was destroyed, in others it yet remains, and in yet others the battle is just being joined! Some say the BETA-CHAMBER worked and the Big Mistake was undone. The question I ask is, how would we know?