So lets say you are going to run a game of Metamorphosis Alpha for some new players, and you're going to use the Alternate Beginning Sequence or one where they come out of cryo-tubes etc. You want it to surprise them but one guy/gal has prior experience. What to do, what to do...

Meet R.O.S.I.E. or the Robotic Orientation Specialist & Interpersonal Educator!!!
Rosie will greet the newly awakened characters with phrases like:

"Due to an oblique angle you have been reinstated with protocol Alpha."**

"As of this time all blenders are in emergency mode."**

"Make sure your feeding tubes and barf-bags are in their upright positions."**

I created this character for my wife who has played MA before. I was running a surprise game for a group that had no knowledge of MA at all and I wanted a helpful yet confusing character for them to deal with that wasn't an NPC, so with a quick google search we created ROSIE 72.

R.O.S.I.E. is supposed to help newly awakened crew with their disorientation and mild Cryo-sickness, she reminds them of their duties and can accompany them on their adventures (like C3PO). However just like the rest of the Warden, ROSIE suffers from the "accident" and now she's not quite as helpful or sensible as she should be.

The only limits I put on her role-playing were that she could never refer to the fact they were on a ship of any kind, and any questions about equipment usage or what was happening had to be answered in weird gibberish or meaningless techno-babble. Below are some of the phrases ROSIE used on the Players when asked questions about things. **see above phrases as well.

"Please locate your carry-on in the drawer below your chamber."

"It is the far-reaching cereal notice for coral underpants."

"Beware, flying darkness eats through the chambers killing indiscriminately." In response to Rosie what is beyond that door? Which by the way set a perfect mood!

"It's all in the angle of the shoes."

"Pale particles of fractoids, cause inter-racial ruckus in level 3 sector 5."

"Big hats made for pork fed walruses are invaluable."

"Look for Fire Stairs in peanut sauce." In response to Rosie, where should we go?

"Pink kittens in Fish suits eat chocolate pies with mittens." In response to how do I use this weapon?

"Big squirrels steal macadamia nuts. They are their favorite food." This phrase was a set-up by my wife for the introduction of our daughter who plays a mutated flying squirrel that showed up later in the game.

At times my wife responded to the Players with beeping or whirring noises and stilted head movements. At first they were scared of her but after she helped a character not sever his own limbs with a failed Technology check on a Vibro-saw, they embraced her as part of the group. We both decided before play that ROSIE cannot allow harm to come to her charges and will always do what she can to prevent them getting hurt. Sometimes they just don't understand her verbal warnings (see phrases above). ROSIE had to use her Paralysis Wave-emitter on a pair of characters when violence broke out between them.

We hope you find ROSIE helpful in your own MA games and feel free to steal ours and let us know what she gets up to aboard your Warden.

Posted by Mightyeroc at 11:02 PM No comments:

So I have made a little progress on the POP Funko Robot project. Here is a shot of them now based and ready for painting. I have placed a couple of Galacta 25 minis next to them for scale. 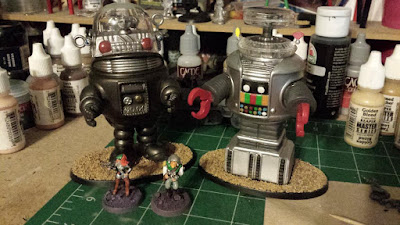 So far so good, I'll post more pics when they are completed.
Posted by Mightyeroc at 11:59 PM No comments: