Meant to post this a while ago. My Metamorphosis Alpha: Epsilon City box set arrived and WOW is it AWESOME!!!


I always wanted MA as a kid, but I made do with the article "Alternate Beginning" from Dragon Magazine and my Gamma World box set. Now some thirty odd years later thanks to Mr. Ward & Goodman Games, I have a so much Metamorphosis Alpha stuff I just might mutate myself!


There is so much going on in the city level alone you could play for years real time. it is beyond amazing!

Big thanks to James Ward and everyone at Goodman Games and all the Kickstarter pledges who made this happen for all of us!!
Posted by Mightyeroc at 9:03 PM No comments:

Metamorphosis Alpha Creatures, or Things to Kill Adventurers with: Part 3

This is the Third and final entry in the original trilogy of creatures my daughter created for me to use in Metamorphosis Alpha. I give you the:

Radiated Eyes variant: The Lunartipse can store up radiation and release it bursts like a grenade. They can do this once every 4 melee rounds in a 5 yard radius. Intensity level 10.

The Lunartipse would most likely be found on Deck 15, or any large body of water.

Posted by Mightyeroc at 8:08 PM No comments:

A cool little something for all you Mutants!!

As we wait in radiated anticipation for the release of Mutant Crawl Classics later this year, here is a little gem that could fill in some fun for you in the meantime....

If you are a fan of the 7th edition Gamma World RPG (the one based off D&D 4th ed.) and you always wanted more of those hard to get Alpha Mutation and Omega Tech cards then your radiation level 10 prayers have been answered!

Follow this link and get yourself the 120 card set!

I just received my set and they are fantastic! Cards were very sharp, readable and look just as good as the originals from the booster packs. Even if you don't play this version of the game the cards could easily be used in other d20 Apocalypse games. 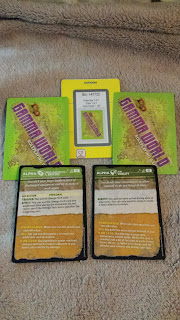 They were well worth the price and I don't have to worry about over-priced single packs E-bay.

Posted by Mightyeroc at 12:21 AM No comments: 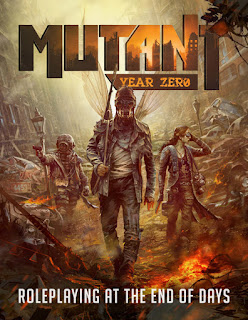 Picked up this RPG recently to mine for ideas and such for my regular Gamma World games and discovered a world of goodness buried within! I don't think it will take over for Gamma World but it sure has some really cool stuff inside.

I like that it uses a set of cards similar to Gamma World, however these guys pulled it off much better. I never understood why Gamma World didn't differentiate the cards in the same manner as MYZ.
Overall this is really a fantastic RPG, with a unique play-style that is very different to what I grew up on. After the party creates their Characters they also collaborate on the creation of the "Ark", pretty much your homebase. In a way it is sort of like Ars Magica and a Covenant. As your characters progress in the game so too does the Ark. The interesting thing is your ARK is a "living character" unto itself that can die, suffer setbacks or even flourish during the campaign. All this is dependent upon the choices the Players make as a governing body for the ARK.

Lair of the Saurians is a Zone Sourcebook for MYZ. It is less a module and more group of locations you can plop down wherever you like in your "Zone" that your campaign takes place in. There is just enough in each location description for a GM to run with and make these places fit his campaign. The book also has a Random Monster Generator that could supply you with some interesting twist on Post-apocalyptic adversaries.

The MYZ is a pretty cool RPG and I will be getting more of the items as they are released. If you like Post-apocalyptic games this one is worth checking out!

Posted by Mightyeroc at 4:46 PM No comments: