My 9yr old nephew spent the night this past weekend and we played Gaslands. I opted for a rules-lite version that he dubbed the "Speed Racer Game". 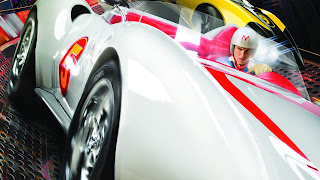 Any car that gains 3+ Hazards will crash & Driver is ejected.

Moving:
Driver can choose any template, but once chosen cannot be switched.

Roll 5 skid dice - Shift results can cancel any Spin/Slide/Hazard result. Any results that cannot be canceled are played out.

If you collide with any other vehicle (even a teammate) you gain a hazard on the currently activated car.

Colliding with track obstacles cause 1 hazard.

We made a simple figure 8 track on a 2.5ft x 6ft folding table. He said if you go off the edge of the table you are crashing into the grandstands!! The kid wants Carnage!! 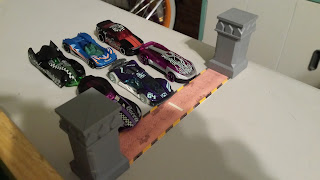 The teams were placed at the Start/Finish line and we rolled for Activation! My nephew got the high roll and we were off!

In our first race Fry pulled ahead of the pack and almost won, but on his final turn to get to the finish line he rolled 3 Hazards and 2 slides on the dice!!! Fry careened into the grandstands!! He did have Zoidberg in 2nd place with 2 Hazards on him and got him across the finish line to win for the Futurama's.

Our second race saw way more carnage as he really started to get a knack for dropping weapons close enough to me that no matter what maneuver I chose I had to take the hazard from the weapon drop as well!

I lost Bishop in the first loop as he plowed through mines then slid into the granstand and crashed!! Well played Kid, well played!

In the shot below Zoidberg tried to avoid the caltrops dropped by Queen, only to have the dice serve him up a Slide he couldn't cancel! Moments after this Fry tried a wide turn around the caltrops and crashed into the grandstand himself!

We didn't finish Race #2 but Zoidberg was right on Queen's tail and it was going to be close!! 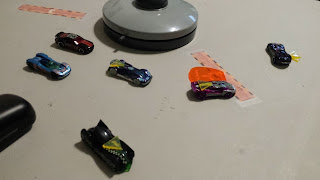 Gaslands: Speed Racer version gets a Two thumbs up from my Nephew who says he would totally play this again because he was never so excited by a "Live Action" game like this before!!

I will say that even without shifting gears/hull points etc, this quick stripped down game was still really fun and fast. Our first race lasted about 35 minutes total, and were about 20 minutes into race #2 before he had to leave.

Email ThisBlogThis!Share to TwitterShare to FacebookShare to Pinterest
Labels: Gaslands

Cross-posting from my main-blog, a GRAMMA WORLD Character.